If a person really believed the bible,  isn’t doing something you know to bad and relying on forgiveness/repentance just a loophole?

Isn’t it better to not do the bad thing in the first place?

and I don’t mean things considered little stuff in secular world – since in xtian religious world, lying is as bad as murder – there’s not really a degree of bad since according to the bible (notice it’s pronounced buybull) you go to the same hell regardless of the sin:

Which brings me to Pedophile Priests

If anyone really truly believes there’s a god, you’d think that it’s the priests.

Yet, their “knowing” that there’s a god and judgment upon death,  didn’t make them refrain from molesting children.
Is it because it’s not in the big 10 commandments – Thou Shall Not Molest Children?

Should people who are in a position of moral authority not be able to work at least that one out on their own?

If there’s a hell, molesting children must be at the top of the list for why you’re there – but again, you go to hell for plowing your field with an ox and a donkey together – so I suppose, once you’ve done that, all bets are off on behavior control.

9 wheelbarrows on Monday and 4 so far today. 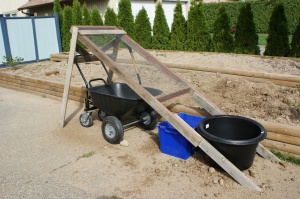 you throw the shovefull onto the angles screen, the dirt falls into the wheelbarrow and the rocks roll down into the containers

go dump the dirt in the garden and pile the rocks on the beside the driveway cairn and well, you can get through fater than having a screen horizontal on the wheelbarrow and have to stop to shake it and carry small amounts of rock.

we’re calling the front window box done expect for some top dressing – next step – a carload of winter pansies!