Well, we were a bit early, but we hadn’t seen our dinner pals for a while.

The theme for dinner was green. We served a green salad, BBQ pork loin, steamed broccoli, Cajun garlic’d Squid Ink Fettucine and for dessert a Melon-Mint over angelfood cake – with green whipping cream.

The pork loins were rubbed with alder smoked salt, pepper, Chinese 5 spice,  and marinated in the juice of a lemon and a lime, honey and crushed fresh garlic.

For the last 3 minutes of the grilling (lump charcoal and cherry wood!), given a wet rub of an herb mix of olive oil, fresh garlic, basil, parsley, 2 kinds of rosemary and the last of the winter savory.

fresh off the grill

I had intended to cook the loins for an hour at about 300, but I made a mistake and didn’t check the BBQ, which shot up to 500 degress and the loins were cooked in 30 mins.  Which threw off the timing of everything else.

In the store the noodles were black and I thought that maybe they’d lighten to a green when cooked. 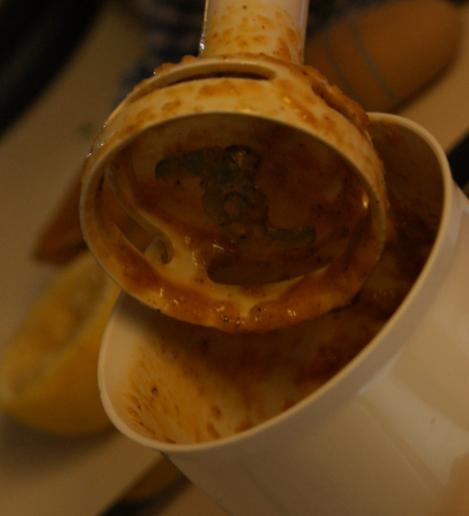 First, the sauce – not knowing what the noodles would taste like, I wasn’t sure about what sauce to use.

I happened to have roasted three heads of garlic in olive oil and cajun spices the day before, so I decided to puree that for the sauce. I was concerned about the oilyness, so we added fresh lemon juice.

Once the pasta had cooked in 3 mins, they were blended. The noodles were lightly coated and it was a wonderful merging of flavour.

not exactly green, but too tasty to care

Dinner was rounded out with a green garden salad with a cumber and dill dressing and steamed brocolli.

I was going to make a green havarti cheese sauce, but decided I was too thrown off by the rapid cooking of the tenderloin to try it. It was also nice to balance the more complex tenderloin and fettucine flavours with a simple buttered vegetable one. 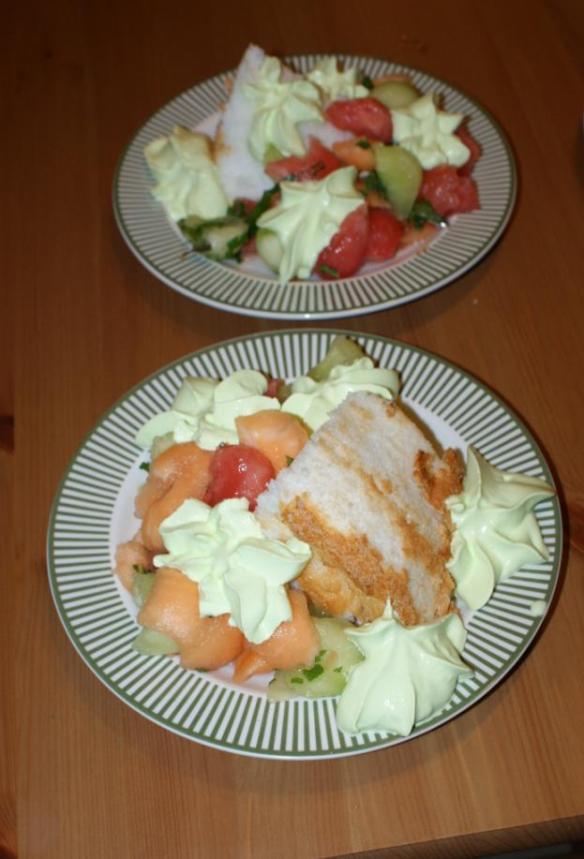 I had partially prepared the dessert earlier. In my BBQ sauces, rubs and marinade cookbook, I came across a melon-mint relish.

I left out the savory ingredients to convert it into a dessert.

I – get ready to giggle – balled a watermelon, honeydew and cantaloupe, added fresh squeezed lemon juice and chopped fresh mint. I placed it in the fridge to meld.

When I was plating the dessert, I put the slice of angel food cake (store bought), spooned the melon mix over it, then made the whipping cream.

Now, if you want perfect whipping cream with the least amount of fuss, get one of those carbon dispensors. You pour in the whipping cream, add vanilla or other extract – and for this, some green food colouring. Close up the dispenser, insert the CO2 tube and it instantly whips! Without the need for sugar.

I toyed with using peppermint instead of vanilla, but didn’t want it fighting with the mint leaves.

This dessert was a light and very refreshing way to end off the meal.