It’s always funny to me when a believer wants atheists to rank religions in terms of what the atheist thinks them acceptable or more believable.

Because when the broadest stroke – a deity/supernatural – is ridiculous on it’s own, the details of worshiping said skydaddy aren’t even considerations in ranking them.

That some religions are worse than others in their violence levels (historic and current), their oppression of women and their attitudes towards minorities and non-/other believers, doesn’t make the least offender acceptable or more beleivable.

Worse, that these believers don’t realize that their attempt to create a slippery slope where if this religion is okay, then why not the next most similar one, is such a clumsy and obvious strategy that is easily sidestepped by answering none of them are acceptable or at all beleiveable.

Well, maybe they don’t realize or more likely, that they don’t respect the atheist as an intelligent person so dishonestly expect that we won’t see through their sad attempt to get a concession.

In any event, I’d rather be the worst of a good thing than the best of a bad thing.

I’ve recently read a couple of books that focus on Elvis’ army days – and I’ve really had my thoughts that the army was a bad thing for him changed. I am not inclined to think it was a good personal move, mixed for the career and still bad for the drug use.

Elvis in the Army: The King of Rock-n-Roll as Seen by an Officer Who Served with Him

Reading these books, Elvis seemed to really thrive there:  he’d always wanted to be included, but his shyness and appearance always made him separate, even before the fame.

Elvis went from trying to make enough money singing to support his parents to being the most famous or infamous celebrity around. He was unprecedented and pretty much, no other celebrity has caught up to him for frenzy and staying power.

Rudolph Valentino – the first headline of The King is Dead – without needing a name for the public to know who was being talked about – caused a massive public outpouring of grief and people lining the train rails as his body was transported. But, 30+ years after his death – he was largely remembered by film buffs and a vague public recollection of him in sheik movies – the desert lover.

The army provided Elvis a haven to get away somewhat from the frenzy, a chance to reinvent himself.

I think that the worst thing the army did was make Elvis more likely to obey authority, which lead him to abandoning his responsiblity for his career and leaving it to Parker who was into money, not art.

Parker was a brilliant promoter, but competent manager, he was not. He locked Elvis into long term contracts that locked Elvis into ruts of movies or concerts – without considering that variety was needed to keep Elvis interested, challenged and creative.

Parker seems to have thought of himself as a long term thinker – he liked the army time to put Elvis back in his place because Elvis was getting too big and very fast – but more than tha, Parker saw that the army, and doing regular service would make Elvis acceptable to a larger audience and be a more lasting artist than a teen idol.

And the problem with that, is that it’s not just the image or perception that creates longevity,  but the quality of the products and art put out there.

If Elvis had continued with movies like Flaming Star, Follow That Dream and even Wild in the Country – he might be thought of today as a decent actor instead of the parody of one. It doesn’t matter that Elvis was the first actor to get a box office share, that he was lead in all but one of his movies and no Elvis movie ever lost money – those were important to business, but not to artistic output and integrity.

I have always thought that the army had been bad for him in terms of the drugs but more recent evidence suggests it was his Mom who started him on her diet pills – speed. Galdy was taking the pills to try to slim down because she wanted to be pretty for Elvis and publicity.

Speed was a diet pill until well into the late 60’s,  so coming from a doctor, they must be okay. The army and doctors over his life just reinforced that the drugs were okay because they were more authority figures.

Sadly, the military still today issues drugs to personnel – remember the US pilot who dropped a bomb on Canadian soldiers? So called “Go pills”.

Given to Elvis in the 50’s and still given to soldiers today.

The the one thing the army did was make him from a teen idol into a respectable performer more tolerable to a mainstream audience. And that did ensure a lasting power for Elvis, but sadly, the mainstream tends to the middle of the road entertainments – so while it was artist longevity, it also meant artistic death.

If he hadn’t been drafted or done the entertainment route as others did without penalty before him – Elvis would have been penalized for it – he’d probably faded out and been a nostalgia act during his life and not done the 68 special or concert comeback.

And isn’t it funny that many Hollywood actors during WWII were able to join up and do troop entertainment or selling war bonds during war time, but Elvis would have paid a heavy price for doing entertainment duty during a time when war wasn’t happening, but could have started again?

In a way, it was no wonder that Elvis took drugs to escape – the regular rules of society stopped applying to him but the celebrity rules also didn’t apply to him.

Elvis couldn’t complain or vent about anything, not to other soldiers, not to other actors or celebs, could be seen to lose too much control at home.

Funny to think that the temper tantrums and contract demands that celebs get away with as a matter of course now – and Elvis rarely failed to show up on set, he always new his lines and was personable to cast and crew, his only contract demand for concert tours was a case of a particular brand of water in the dressing room – but concerts in the last years were ended because of drug related health problems – he still managed to do over 1000 concerts between 1969 and 1977 – he packed more shows in those 8 years than most performers do over a 20 year career.

It’s a wonder that he didn’t explode.

Now that the front yard is taking shape – okay, except for some weeding and planting the seedlings we’ve been sprouting – it’s time to make the back patio and deck our spring and summer oasis. 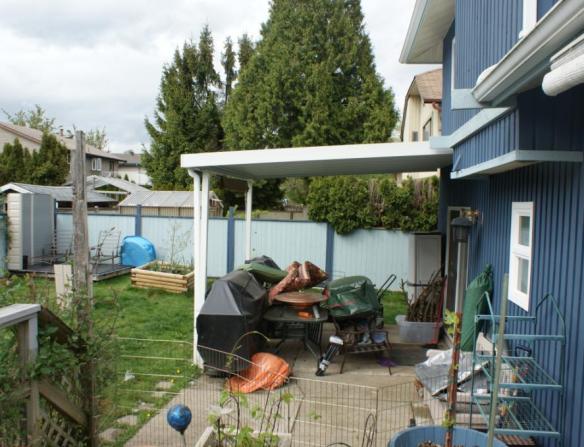 the furniture clutter under the overhang

Normally, this area is not like this – In the far left corner you can see the last remaining wall of the garden shed, where the furniture and non-electrical yard tools were kept.

When the windstorm knocked this shed down – and this is not a product we’re every buying again – wood sheds or nothing – we had to get everything out before the total collapse – and it ended up in a heap here.

But, since the weather is getting nicer – we’re setting out the deck furniture.

We have more than last year, as the folks next door moved out to a smaller place and we bought a set of living room type outdoor furniture from them.

So, we have an outside kitchen, living room and dining room. If we had more bushes in the yard, there’d be a bathroom too and we could live in the yard!

Here’s the reverse view of the upper and lower decks:

covered in pots and pots of plants

The wire fence is a portable dog kennel – stretched out to keep the dogs off the deck – they like to eat the potting soil.

In the blue barrel foreground is our new fig tree, there’s strawberries in the pale rectangle containers on the railing, 4 kinds of blueberries, a pink Aspen hydrangea in the far front corner, honeysuckle outside the railing, a kiwi inside with the wood lattice, and many herbs usually 2 to 3 kinds of rosemary, oregano, basil, thyme, and winter & summer savory are the staples. A few other herbs like catnip which is supposed to repel ants, but is also fun for the cats and last year I added lemongrass.

Lemongrass has a strong citronella scent and it’s supposed to be good to discourage wasps – and it’s nice to break off some stalks, wrap it around chicken or pork and BBQ for a Vietnamese flavoured dish.

Hops on the side yard

We also got these containers and lattices from the folks who moved – they are hops. I don’t think that they ever made beer from them, but they are an attractive vine plant that adds some privacy and greenness.

This is also our morning glory problem area – I sprayed it with the salt and picking vinegar to get the vines dying and then we ripped it all out down to the roots that we could reach – I’ll be adding more vinegar this weekend and hopefully the wretched stuff won’t be back next year.

the tidy up begins

We’ve decided how to lay out the planters on the deck and have started to shift things around.

Instead of the 6 hanging baskets on the inside, we’ve moved them entirely to the front rail alternating in and out.

We’re going to have the hops on the outside and the clematis climbers on the inside of the side railing. The Alpine Hydrangea stays in the side front corner, surrounded by the blueberries. The hanging baskets on the inside have herbs and the outside ones have wave petunias – which finally arrived and we bought 16 – half for the front window boxes and half for here – they are danglers so hopefully the goldens won’t eat them. 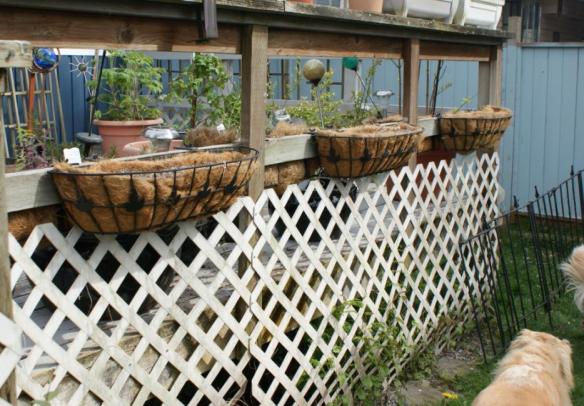 You can just see the goldens checking out their slightly reduced yard size – we moved the small iron fence that stopping them running down the side yard in morning glory land to just even with the deck so they don’t eat the dirt from the hops.

And I really can’t wait for our first back yard fruit salad of blueberries, strawberries, cherries and the blackberries that peek over the fence from the back fence neighbour’s yard!