Consequences, be they unanticipated, unexpected or unpredictable, are rarely considered. The following true and unembellished story is a testament to how a series of poorly thought out decisions, lead to serious consequences which are often paid by or imposed on bystanders.

It was the late 1990’s and I was a late 20’s lesbian activist, emerging from the militant baby dyke phase. It was still legal to discriminate against gays and lesbians but we where no longer deemed to be a mental illness or illegal by our nature. 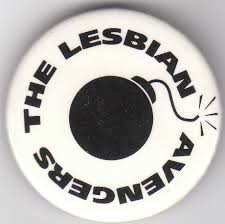 Act Up and Queer Nation were vibrant and brash and the Lesbian Avengers chapters were forming across the US and Canada as a new riot grrls artful and humorous brand of activists. It was the night of the initial meeting of the Vancouver Chapter and following the meeting, we decided to head to the local lesbian watering hole a few blocks walk and a bus ride.

The Seattle lesbians who brought us T Shirts and the Avenger’s manual had declined to join us and had headed back south for their three hour drive home.

We were high spirited and excited about what actions we’d be undertaking soon and the fourteen of us headed en mass down Commercial Drive from the Vancouver Lesbian Centre office – an organization that was going to implode in a variety of internal and external allegations of discrimination and community accountability and the corresponding lack of recognition of the efforts of the board and volunteers, and resulting in an evening of public emotional puss letting that I described as the most psychologically violent experience of my life until 2010. But all of this was unforeseen by the newest chapter of Lesbian Avengers, who were planning to take Vancouver by storm and hijinks.

Someone mentioned phoning other people to hook up with us at the club and after a block, we realized that one of our number – Estelle – was not walking with us. Alarmed by her disappearance, we looked up, down and across the street.

There, at a payphone by a gas station, was Estelle. Being blocked by two young men from using the phone or leaving. They were gay bashing her to impress their girlfriends, but so far, were using physical intimidation and verbal abuse to trap her. They picked the wrong night to impress their girls.

As one, the remaining thirteen of us, ran across the road to stand in solidarity with our lone and trapped member.

It was clear that the two young men wanted to scare Estelle and show off how manly they were, being two men against one woman; but they hadn’t seemed particularly eager to actually physically engage with a lone dyke who wasn’t backing down. Estelle hadn’t specifically told anyone in the group she was breaking off to use the payphone – these were the days well before cell phones were common – but she also knew the group of us was nearby. Just a scream away, really.

The two young men, content to bait the dyke, now were faced with a very different situation, it was now two against fourteen. Fourteen very angry, uppity dykes who were already keyed to take on the world and win.

As Estelle was enveloped in our midst and we were secure in our sheer numbers, the posturing back and forth began, the name calling, the daring to start something. I stood near the sideline, wondering how we were going to get back to going to the bar and feeling the pull of the mob mentality, the anger at the years of discrimination, the injustice of these two punks picking on Estelle and showing off for their girls, and anger that the girls for egging their boyfriends on – after all, if a guy is gonna beat up one girl to impress another, what is the likelihood that he will also beat that same impressed girl?

At the edges, I could feel several of us waffling, fighting for our rights was one thing, but physically fighting wasn’t really what we had been signing up for. At the centre of our group, the gals had their fists up and words flying like daggers and they were advancing on the two young men, who weren’t advancing but weren’t able to see a way to back down, never mind, back down and still have a chance to get laid.

Everything seemed to slow down, the fight postures and gestures, the words distorted as if underwater and I stood there, hands limp at my side, uncomprehending how Estelle wanting to use the payphone had escalated into this explosive situation.

Then, events seemed to spiral quickly in a new direction, as a lone man walked by and, without pausing, stared at the two young men in the hot spot.

“What are you looking at?” One of the two demanded of the third man. A palpable shift in the scene to the new player.

“Two pussies about to be beaten by a bunch of dykes.” Shot back the third man.

Even as the response was leaving the third man’s lips, the two men moved as one to pounce on the third man, emboldened by the two to one ratio; and the three men were rolling on the sidewalk and grass, pounding and kicking and clawing at each other.

This seemed to knock some sense into the group of dykes, even the two girlfriends seemed to recoil at the release of violence.

I looked down that the writhing men, then to the dyke group, and we were all dumbstruck, unable to move. Partly shocked by the sudden shift and the realization that that could have been us.

But, this third man was not the only bystander who was to suffer the consequences of Estelle’s ill advised decision to break from the safety of the group or the two young men’s posturing and need to feel manly by gay bashing a dyke.

It was after all, a busy intersection of Commercial Drive and Hastings Avenue, and 10 pm, there’s still a fair amount of traffic.

So, it was with some surprise that there was only one driver of an SUV stared out the driver’s side window at the three men rolling around and fighting at the feet of a group of young women, rather than watching the major intersection and changing lights ahead of him. The driver, not believing what he was seeing, ran the unseen red light and t-boned a car heading through the intersection on their green.

The sound of the shearing metal and crash unstuck all of our feet – the three men jumped up and way, the lone man running down an alley, the two bashers racing back to their car and their girls – while us dyke ran to the accident.

We divided between the two cars to check on the occupants.

Inside the SUV’s back seat was a woman and small child, terrified and not knowing why they had suddenly crashed, while the driver stared ahead dazed – everyone was in a state of shock.

Everyone in the vehicles appeared whole and conscious, nothing bleeding or obviously broken. The shock of the accident was wearing off and we were trying to decide what to do, when we heard the sound of distant sirens.

I will never know if  the sirens were in response to the street fighting or the accident or wholly unrelated, because the sound of them and the sight of an approaching bus, made the group of dykes react in panic and fear – we ran for the bus stop, and were whisked away from the scene.

We took over the entire back of the bus, winded, rambling, wound up and de-stressing. We all turned to Estelle and chided her for leaving the group without back up, feeling awful for the people in the vehicle and knowing that the entire scene would have played out differently, if we had all gone as a group to the payphone, but knowing that ultimately, any single person should be able to go about their lawful business unmolested  and assaulted by other people – and that while we each carry a certain burden of personal responsibility – including the driver who shouldn’t have allowed themselves to be so distracted as to not pay any attention to the intersection lights – the events of the evening were the consequences of two young men who took it upon themselves to torment and punish a women for being alone and for being a dyke.

This shouldn’t be acceptable conduct by anyone, least of all, the girls the boys sought to impress.