Of course, with the ice off the bow and using a telephoto lens, while the ice was low to the water line, it could easily have been twenty feet across without anything as a size comparison. Size becomes deceiving, depending on where you are viewing, as we came to understand when the cruise ship parked a half mile from the glacier. More sea ice:

The sheer size, the cold air, the blueness was very exciting – but sad as well – our new friends James and Rebecca (callout!) showed us the pictures they’d taken of this same glacier just a month before – and there was no ice cave then – of course, with the glaciers moving several feet a day, each month brings a fresh new face to the glaciers.

Around this time, another family asked me to take a photo of them with their camera with the glacier as a backdrop – I was entirely happy to do so.When we reached the next glacier, which we had to change sides of the ship – the family sought me out again – which was no problem – I often get asked to take other people’s pictures with their point and shoot (or PHD cameras for push here dummy) because I have a digital SLR camera with a nice looooong lens that make people expect I am a professional shooter when I am just a camera buff.

Anyway, while we were watching the second glacier and the US Park Ranger who had come on board was talking about it, the Dad of the photo family said: “Yup, yup, completely natural melting.”

I was stunned, first because you can’t know a cause of anything by merely looking and one data point doesn’t say anything – but having spent not only the time in the conference, but understanding climate change concepts, I was horrified at the willful ignorance, confirmation bias and cognitive dissonance the man was engaged in – and for someone who has had children and given no understanding to the world that we are leaving the children to grow up in – how can people continue to believe that the world is as it always was and will be or that some deity will come and fix what we have polluted.

Canadian on an American dominated cruise or not, I blurted out “it’s not natural, ice sheets are disappearing since the Industrial revolution. It’s human activity that’s not natural.”

“You’re kidding” he gasped at me – and I launched into an abbreviated version of the climate convention, too stunned to really get that he was in total denial that humans have the ability to impact the climate.

It seems to me to be part of that religious throwing up of hands that the universe is too complex for humans to understand, therefore goddidit and it’s godsplan which we can’t know but they are sure doesn’t include gays and atheists, that somehow to believers that the world is too big and they are too small, so they can’t imagine that 7 billion people can make a huge difference to the pollution.

Apparently, the resolving the acid rain problem has made people forget that we do have widespread pollution impact on the planet on a planet wide and impacting scale. There are simply too many people, with too much resource extraction, industry, commerce and transportation – never mind excrement – output to not have an impact on the world’s ecosystems, which are all inter-dependent and connected. The human caused arrival of rabbits in Australia continues to be an elusive point for people to be able to generalize that human activity impacts the environment both locally and globally.

In any event, the family scurried away from the crazy Coatless Canadian trying to explain science to them – probably to delete the picture that I took for them.

The same glacier from a bit farther away as we moved to see the John Hopkins glacier – what struck me was the stripes of dirt, showing how the glacier is melting and the dirt and pollution concentrating into visible dark bands.

We moved off to the next glacier, where we parked for an hour and watched ice calve off – no huge ice bergs, but the glacier was moving at 7 feet a day and there was a lot of falling activity – we could hear the ice groan and crack and then have a fall of ice chunks plummet into the water with a splash. This glacier was over 2 miles across and 25 building stories hight.

At 7 feet a day, it won’t take long for all the ice fronting this glacier to be sea ice – this glacier is moving forward because there’s more precipitation at the source in the mountains than the melt at the front at the sea level.

We didn’t see another glacier in the bay because it had receded farther inland, leaving only the rocks and debris at the water line, not enough precipitation at the source to balance the movement of the glacier to the water.

Next stop for the Coatless Canadians: Juneau, Alaska 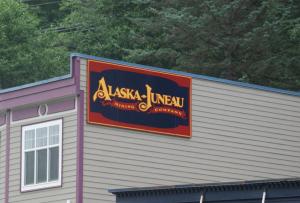 and not just to buy coats!

I was surfing around on youtube and found a 1957 Canadian interview and approximately 7:40 mins in, Elvis says that the only way for America to stop people from enjoying themselves is if America goes communist

What struck me, especially with the recent Michelle Bachman gaffe of wishing Elvis a happy birthday on August 16, is that very telling and socio-politically astute of the 21 year old Elvis, since it’s what the moral majority/religious right/socially conservative rethughlicans (as opposed to fiscal conservative republicans) are exactly still trying to do – control people’s private behaviour.

OUR leaders have asked for “shared sacrifice.” But when they did the asking, they spared me. I checked with my mega-rich friends to learn what pain they were expecting. They, too, were left untouched.