You have nothing to fear unless you’re a criminal terrorist.

The Conservative rallying cry to increase the appearance of security at the expense of actual privacy.

Not for the high minded, but I’d rather be killed by a terrorist and die as a free citizen with privacy and human rights, because giving those up means the terrorists win because what they are seeking is curtailing if not suspending those social values that the terrorists see as western decadence or liberal bleeding heart values.

Because the reality is that when we do give up values that define us in order for – or rather in hopes of – less violence or tolerance from those who are against said values – then we are allowing their violence and hatred and ignorance to win.

Worse, there are no concessions short of unconditional surrender that the intolerant aggressors will accept – so why delay the inevitable? 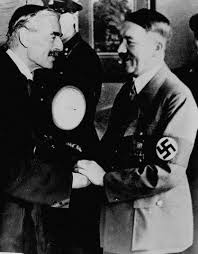 Chamberlain and Hitler: No deal

Being unwilling to give up our freedoms, in particular privacy, in exchange for less abuse, threats and violence, aka physical security, is entirely rational since we are rarely in the path of life threatening violence but in need of our privacy on a daily and even hourly to moment to moment.

It’s not enough to consider decisions rationally and weight the possible consequences, we also have to consider risk and threat assessment factors – that is to say – how likely any given event will be against the cost and impact of measures taken to reduce the likelihood or mitigate the outcome.

What’s interesting is that conservatives maintain the belief from the economic model that people are rational actors and make decisions on that basis – usually applied to criminals. The conservative thinking is that a person won’t be a criminal if the prison term is long enough.  But it is patently false thinking that there’s a rational basis to an irrational or desperate or opportunistic decision of engaging criminal activity.

Criminals are not discouraged by prison sentences for two simple reasons – first, they do not factor being caught so the length of the potential sentence is not a deterrent, and second, because prisons are criminal universities, where criminals are housed, fed and get to interact with a wide variety of inmates from whom, they learn how to be better criminals or become acquainted with better criminals.

This is not to suggest that prison is a pleasant vacation place, but the percentage of repeat offenders clearly demonstrates that prison is not a deterrent to criminals.

Prison seems more to fulfill the revenge and oblivious needs of the public, who remain largely unaware of the often social injustice of a prison system wherein minorities are overrepresented by demographics, are often subjected to longer sentences for the same crimes and is generally a waste of talent and labour, better directed into rehabilitation and training to wean people away from criminal activities.

Social programs, education, economic participation and opportunities, ensuring people are able to be participating and productive members of society before they consider criminal opportunities – prevention is cheaper in money and human costs than after the fact enforcement and punishment.