Text to copy and paste or use your own wording:

Dear PM Harper – Nina Tryggvason would make a better Prime Minister than you. She was bullied out of the Federal Government of Canada for being a lesbian and an atheist. She worked in 13 Departments and none of them prepared a Question Period Card for you. That’s what your kind of “transparency” and “accountability” actually results in.

Nina Tryggvason worked for 13 years at

While I was not bullied at every department – there was bullying and wrong doing going on at each and every single department that I worked for.

That said, in the majority of offices the union and management are at such odds with each other that the employees are who suffer from both sides.

In all departments, employees are not able to work to their individual best potential – mostly owing to outdated work classifications and the hostile relationship between management and the union.

Most employees are hired by one department and that is were they retired from – often in the same job they started in even when technology and work process make position and work obsolete.

There does need to be a revamp of the public service and the biggest and most costly area is the top heavy structure of management and their over classified assistants and executive assistants.

Worse, that people who are employed by Federal Government Parties – and this is ALL OF THE PARTIES – these partisan people get to parachute into top jobs in the public service, without competition, without evaluation, without transparency and without any fairness to the public service employees who have worked their entire career in the service of Canadians.

I told every manager that I met in 13 departments and many senior officers that I could do their jobs better than they could. and I bet them $50.

On this blog, I talked about how in 1984, the career counselor at my high school and the career component of the Life Skills course that included what is commonly known as Home Economics (cooking, sewing) and Industrial Education (wood working, metal working, drafting/blue prints) – and the computer data base, when I entered my skills and interests told me that there were only 2 potential jobs for me in the database of 10,000.

The first and top job for me was Prime Minister of Canada.

So, Mr. Stephen Harper you are in my chair and that chair belongs to the people of Canada.

Who deserve to be served by a person who respects the Canadian Charter of Rights.

Who respects the citizens of Canada – from the First Nations to women to ethnic minorities and also Gay, Lesbian, Bisexual, Transgendered Citizens who pay taxes and obey the laws of the land.

And do so more than you, Mr Harper who fixed elections to being every 4 years and then broke your own election laws in a series of elections that Canadians did not want and stayed away from – giving you a majority government from an ever decreasing number of voters.

Shame on you Mr. Harper for turning Canada into the third world nation that you said it was. 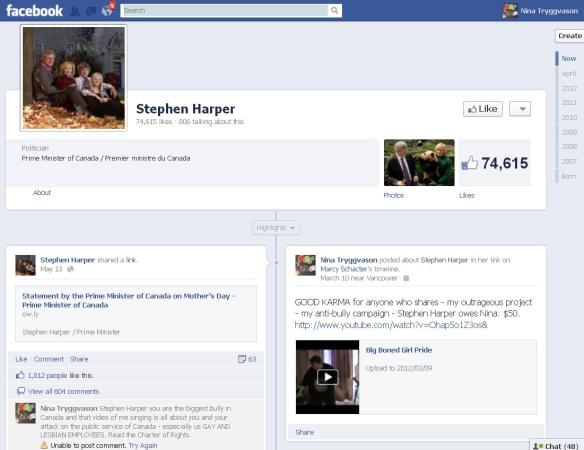 Nina’s last Blog about having been bullied in the workplace

The Federal Government of Canada

You can not pray way the gay and teaching others to hate as you hate yourself is CHILD ABUSE.

Life does not begin at conception and end at birth!

To hate is to be anti-life – and self loathing people who hate those who are honest with themselves and out in their families and community need to stop preaching a gospel of hating other people.

Then claim that they are doing god’s work and that their god has anything to do with love.

Haters make Jesus cry – you know Jesus – he had TWO DADS and hung out with 12 other men and never married.