I was reminiscing about our August Alaska vacation and decided to post more photos from our visit to the Fortress of the Bears in Sitka Alaska:

Victoria, BC was our final port of call.

We Coatless Canadians would have liked more time in Alaska, that being the foreign country to us – so it was with some dismay that I had a conversation with an American passenger who had the same thought as me. But coming from her, the idea of more time in Alaska and less in Victoria was her not being willing to explore a city in another country.

For me, being from the lower mainland of BC and a short ferry ride from Victoria, stopping there wasn’t a big deal to me – but for her, being from the American south – Victoria was an exotic port of call – and it was a let down that she wasn’t as interested in her country neighbour as we were.

Heading down the gangplank, we passed what I thought were two security guards, but who turned out to be Canada customs – and I hadn’t realized because we just breezed passed them without a pause or question.

Instead of being met with people hawking tours and wares, we were met by volunteers in 1800’s period costumes who handed out walking maps and tourist information.

Unlike the small Alaska towns, Victoria is our provincial capitol and isn’t designed to center around tourist cruises – so the dock was not central, but a walking distance from the downtown core.

We would have stayed on the ship, but needed to run an errand (shhhhhhh to James and Rebecca!). I thought it was really interesting that Canada Post mailboxes were on the street in pairs – one designed for Vancouver Island mail and the other for off island mail. It certainly was an easy cost effective step for Canada Post to have the public do the initial rough sorting.

While I did take my camera, we were there in the evening and digital is not as forgiving about dusk and dark as film cameras, although, I did get this nice shot of the Parliament building, which is lit up after dark and looks much nicer when clicked on than this thumbnail:

We headed back to the ship and watched the crew play tug of war with a huge rope on the dock for a while – then it was to the room to pack. Luggage had to be in the hallway by 1 am so it could be placed in the unloading queue and disembarkation schedule.

We packed, doubled checked, left the luggage out in the hallway and headed up for our last night in the Crow’s Nest aka 10-Forward to have final drinks and conversation with Skeptic conference participants.

The bar was strangely empty, but for a few Skeptics, so we compared Victoria town trips, trip highlights – one of the group had done a whale watching tour and had seen an Orca leap from the water and the debate whether anyone had gotten a photo was hot. None of the group had seen the humpback whale on the trip up and we were the only ones in the group who had gone to the Fortress of the Bears but most had gone to the raptor centre in Sitka. It was the orca whale pod we encountered heading to Victoria that was the shared wonderous experience and highlight of the trip.

Other than the conference and getting to mix and meet with so many other skeptics from around the US and a few of us from Canada.

In the morning, we prepared to leave and owing to a packing malfunction, I ended up disembarking the ship and going through Canada Customs bra-less; which my bright pink Juneau hoodie helped to somewhat disguise.

Our last Alaska stop was Ketchican and it was only a short 4 hour stopover, so we just roamed the town centre, which had a funner spirit about it than the previous two stops. A playfulness overlying the need to make the most of the tourist season to carry over. 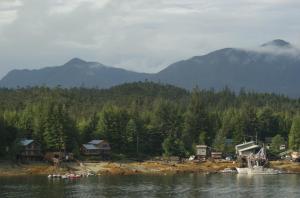 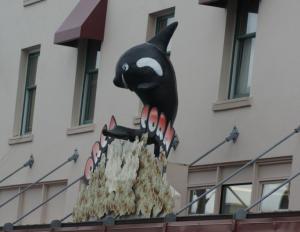 Back at the Skeptic Conference, we were treated to interactive lectures by Don Prothero who blogged here about the conference.

It’s important to note the the melting of glaciers and ice sheets is significant not only for increased sea levels, which means less land, but also the loss of ice sheets means that the global tectonic plates are responsible for earthquakes as the weight of the ice sheets stops pressing down on the plates, the plates rise back to their pre-ice sheet positions, causing earthquakes, such as the August, 2011 on the east coast of the US and Canada.

We were also treated to a lecture about Emergency Preparedness, which is a passion of mine, by  Randall Duncan, Director of Emergency Management in Sedgwick County (Wichita), Kansas, and instructor for FEMA and Park University in Missouri. His lecture was very layperson friendly and clear – the cost of doing nothing to prepare is too high, and it comes down to three simple choices:

There’s two obstacles to the adapt and mitigate strategies: Lack of political will and religion.

Politicians are about securing enough benefits to their constituents so that they will be re-elected – this being the case, politicians do not take a long view or make the hard decisions – they are driven by what is popular so they get re-elected.

It is difficult to convince people to prepared for potential negatives, despite the cycle of famine or feast, because when we are feasting, we forget about the famine days.

When financial resources are scarce, people are more likely to hold onto the money or deal with what’s necessary in the short term, rather than spend money to mitigate future disasters, which may or may not occur.

This is where the religious obstacle comes into play – people who beleive that disasters are god’s punishment for human behaviours (usually the things they don’t like or approve of, such as the fact of there being gays and lesbians, abortion, women’s rights and so on) – they are not prepared to mitigate against their god.

Moreover, people who beleive in the rapture are also not going to be willing to have the government mitigate against god’s wrath and don’t see a need to, since after the wrath, god will restore the earth to it’s original factory settings for the believers.

People who throw their hands in the air and say the universe and the earth is too complex for humans and resort to god as if that explains anything are saying that understanding science is too hard, so they won’t listen.

They don’t want to understand climate science or even that climate scientists are all in agreement that human activities – transportation, industry, commerce, resource extraction, conversion of natural habitat to farmland or urban sprawl are all contributing more pollutants and gases that contribute to warming than the earth can store.

Sure, a lot of the warming is natural – volcanic ash, coal seam fire – but natural processes have natural offsets – it’s human activity that is unchecked and unbalanced – especially since we are no longer subjected to natural limitations on infant mortality rates. Modern medicine means more people live and modern dentistry enhances the lifespan of people.

Humans are outbreeding the earth’s ability to balance our polluting output. Fortunately, there are some check and balances occurring on this front too – most countries are not breeding at replacement levels. Some even point to pollution as a link with the drop in sperm counts in the industrialized nations.

Mr. Duncan put it plainly – we have to plan for future contingencies or we will cease to survive. Adapt or die – and it’s the adaptivity that’s the meaning of Darwinian fitness.

Our second port of call: Sitka.

At all other ports, the cruise ship pulled into the dock, secured lines and extended gangways. Not at Sitka. There was no docking, so passengers had to line up to be taken ashore in the lifeboats.

Which, I thought was a good idea – as an emergency preparedness buff, it seemed to me to be a good way to ensure proper functioning of the lifeboats and associated equipment – I don’t know why, but it’s called “tendering”. 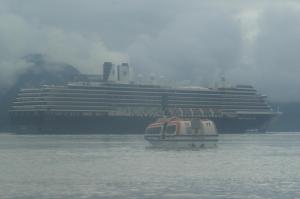 Perhaps because the image is like watching a Mommy watch it’s offspring take their first steps into the world.

What to do in Sitka?

In all the American ports, we disembarked to tour operators hawking tours or sales pitches. It was a bit jarring – on one hand, this was a vacation to relax and be pampered – but even on board ship, there was a constant sense of being hustled – automatic service charges on everything ordered through the crew and on board merchants and service providers that were extra – and it started right at boarding with the posing of a photo you could later buy packages of. The photographers roamed the ship offering to take your picture – and this made sense back in the day when cruising was more of an occasion and before digital cameras.

When we landed in Victoria, the primary greeters were elderly volunteers in 1800’s costumes providing free walking maps of the city, tour operators picking up the people who had already booked tours and free shuttle buses to downtown. Victoria, being a major city and our province’s capitol, was not reliant on the cruise ships for revenue, it is a working city with commerce and industry that’s augmented by the cruise ships, not dependent on their season to carry them through the year.

Which perhaps, explains the more relaxed welcome, a smoke ’em if you got them laid back-ness that was lacking in other stops. Or perhaps, just a difference between Americans and Canadians or maybe just rural vs urban.

We decided to take a tour and decided a driving rather than a water tour. 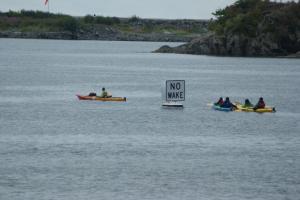 There was a kayak tour, but it made little sense to me to pay to be the one who provided the labour/power for the tour.

A drive around Stika provided local history and town highlights, but it was the Park reserve and the two animal sanctuaries that we preferred – wildlife, even being care-taken, was more interesting than people to us. 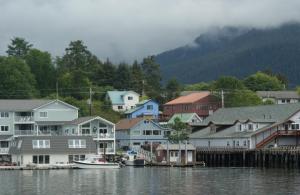 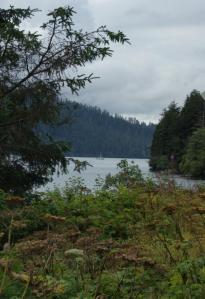 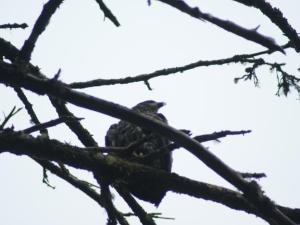 From the park to the bear sanctuary – the Fortress of the Bears assumes the care for bear cubs who’s mother had to be shot or who died. The sanctuary has two sets of bear cubs currently – a pair at 900 pounds each and another with three cubs at around 450 each.

I couldn’t help but be surprised how playful and powerful the bears are. 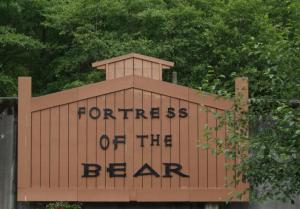 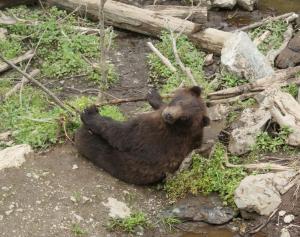 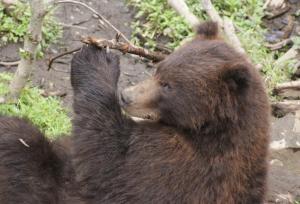 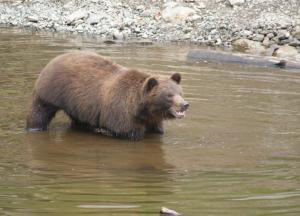 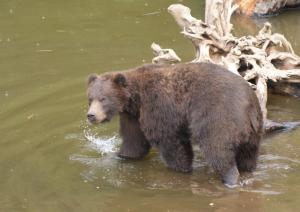 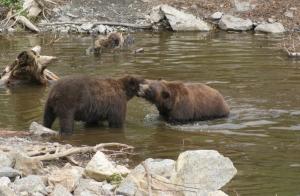 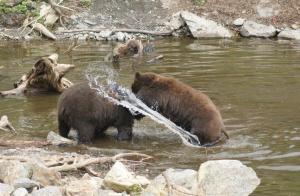 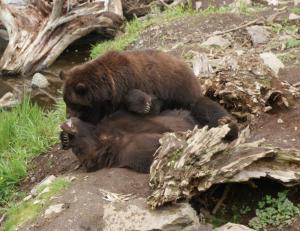 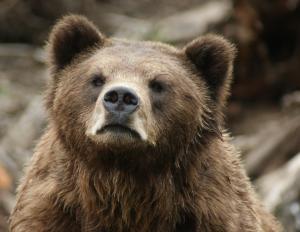 From the bears, it was off to the Raptor Center, for rehabilitated eagles, falcons, owls and other feathered hunters. 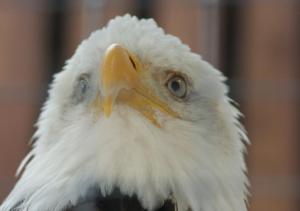 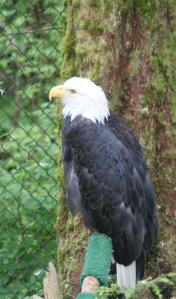 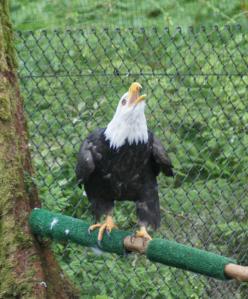 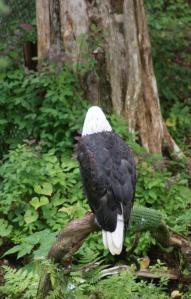