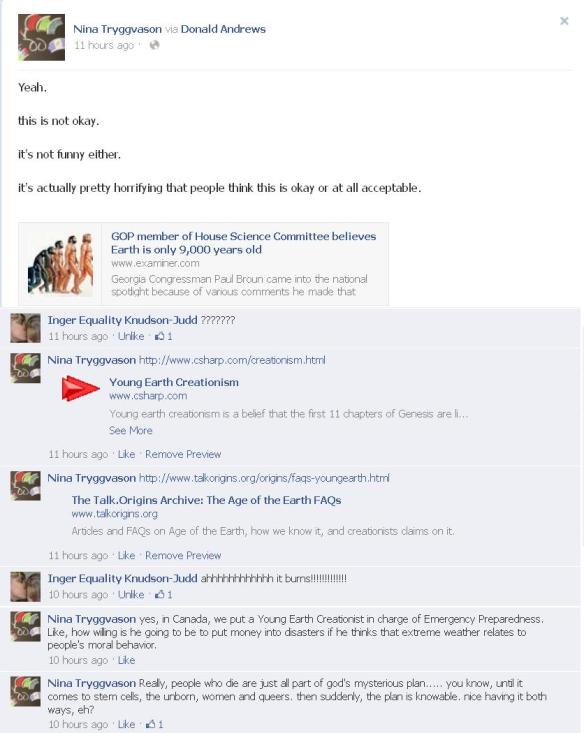 From: Talk Origins – What is Creationism?

Creation and evolution are not a dichotomy, but ends of a continuum (see figure), and most creationist and evolutionist positions may be fit along this continuum (Scott 1999). The successive steps labelled in the figure are described below.

Flat Earthers believe that the earth is flat and is covered by a solid dome or firmament. Waters above the firmament were the source of Noah’s flood. This belief is based on a literal reading of the Bible, such as references to the “four corners of the earth” and the “circle of the earth.” Few people hold this extreme view, but some do.

Geocentrists accept a spherical earth but deny that the sun is the center of the solar system or that the earth moves. As with flat-earth views, the water of Noah’s flood came from above a solid firmament. The basis for their belief is a literal reading of the Bible. “It is not an interpretation at all, it is what the words say.” (Willis 2000) Both flat-earthers and geocentrists reflect the cosmological views of ancient Hebrews. Geocentrism is not common today, but one geocentrist (Tom Willis) was intrumental in revising the Kansas elementary school curriculum to remove references to evolution, earth history, and science methodology.

Young Earth Creationists (YEC) claim a literal interpretation of the Bible as a basis for their beliefs. They believe that the earth is 6000 to 10,000 years old, that all life was created in six literal days, that death and decay came as a result of Adam & Eve’s Fall, and that geology must be interpreted in terms of Noah’s Flood. However, they accept a spherical earth and heliocentric solar system. Young-Earth Creationists popularized the modern movement of scientific creationism by taking the ideas of George McCready Price, a Seventh Day Adventist, and publishing them in The Genesis Flood (Whitcomb & Morris 1961). YEC is probably the most influential brand of creationism today.

The Omphalos argument, first expounded in a book of that name by Philip Henry Gosse (1857), argues that the universe was created young but with the appearance of age, indeed that an appearance of age is necessary. This position appears in some contemporary young earth creationist writing. For example, Whitcomb & Morris (1961, p. 232) argue that earth’s original soils were created appearing old. The position is sometimes satirized by suggesting that the universe was created last week with only an appearance of older history.

Old-Earth Creationists accept the evidence for an ancient earth but still believe that life was specially created by God, and they still base their beliefs on the Bible. There are a few different ways of accomodating their religion with science.

This view says that there was a long temporal gap between Genesis 1:1 and Genesis 1:2, with God recreating the world in 6 days after the gap. This allows both an ancient earth and a Biblical special creation.

Day-age creationists interpret each day of creation as a long period of time, even thousands or millions of years. They see a parallel between the order of events presented in Genesis 1 and the order accepted by mainstream science. Day-Age Creationism was more popular than Gap Creationism in the 19th and and early 20th centuries.

Progressive Creationism is the most common Old-Earth Creationism view today. It accepts most of modern physical science, even viewing the Big Bang as evidence of the creative power of God, but rejects much of modern biology. Progressive Creationists generally believe that God created “kinds” of organisms sequentially, in the order seen in the fossil record, but say that the newer kinds are specially created, not genetically related to older kinds.

Intelligent Design Creationism descended from Paley’s argument that God’s design could be seen in life (Paley 1803). Modern IDC still makes appeals to the complexity of life and so varies little from the substance of Paley’s argument, but the arguments have become far more technical, delving into microbiology and mathematical logic.

In large part, Intelligent Design Creationism is used today as an umbrella anti-evolution position under which creationists of all flavors may unite in an attack on scientific methodology in general (CRSC, 1999). A common tenet of IDC is that all beliefs about evolution equate to philosophical materialism.

Evolutionary Creationism differs from Theistic Evolution only in its theology, not in its science. It says that God operates not in the gaps, but that nature has no existence independent of His will. It allows interpretations consistent with both a literal Genesis and objective science, allowing, for example, that the events of creation occurred, but not in time as we know it, and that Adam was not the first biological human but the first spiritually aware one.

Theistic Evolution says that God creates through evolution. Theistic Evolutionists vary in beliefs about how much God intervenes in the process. It accepts most or all of modern science, but it invokes God for some things outside the realm of science, such as the creation of the human soul. This position is promoted by the Pope and taught at mainline Protestant seminaries.

Philosophical materialism says that the supernatural does not exist. It says that not only is evolution a natural process, but so is everything else.