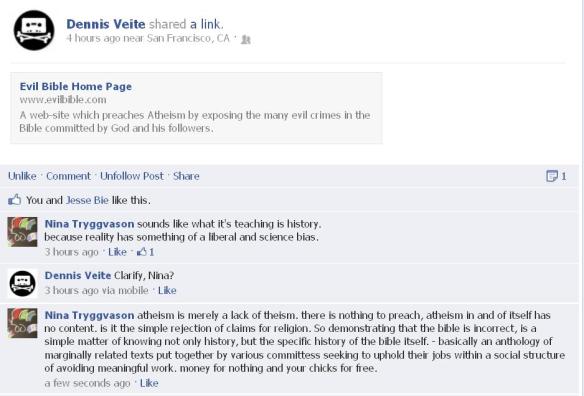 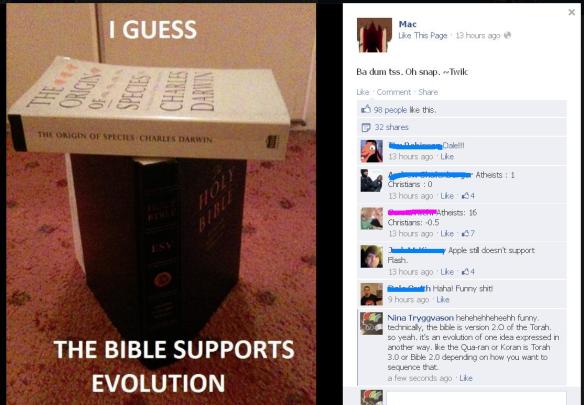 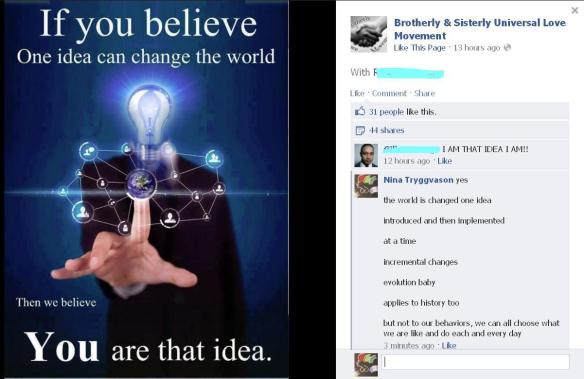 On the topix forum, a poster called “humble brother” that I have been engaging off and on for a couple of years, so I know that he never changes his tune posted something a little new that I could see was maybe starting to gel or maybe he was just in thrall to his own ideas – but I decided to see if I could open up a new conversation that wasn’t the theist-atheist circular debate:

Same back to you and it’s not funny, it’s sad

it is rational to not accept claims lacking in evidence (atheism)

yes, as I have written it without word games, this is the basis and sum total of what atheism is

and then the conversation repeats, because you are not capable of having a meaningful discussion or exchange of views and experiences because nothing you are talking about resonates with us and nothing we say can resonates with you

so we are literally not talking about the same religion

your religion is the nice loving one in your head

how people have experienced Christianity

and when you assert that Christians are moral and loving

you beleive that because that’s your expereince

you are not a messenger with a love message

you are a jack booted thug from a global organization that has a history of genociding inconvenient populations, murdering individuals who would have advanced our understanding of the universe because their ideas didn’t feed or support the religion of the day and holding back social progress and limiting our freedom to take liberties with whatever makes us happy – which is what America was meant to do.

Religion says this is the way to be, so obey or suffer.

and when we don’t obey, we suffer in spades – as history demonstrates, over and over

so, we don’t need your abusive, authoritarian, control freak, domineering love that doesn’t bother to take into account any part of our person or experience in the world.

because the only true christianity seems to be in people’s heads and that’s a very different Christianity that the one we’ve all experienced in the world.

Any religion or philosophy can claim to be about whatever it likes – but in the marketplace of ideas – it’s all about the execution – what have you actually done in the world?

When you understand what religion has done in the world, then you’ll understand why there’s no sale, why religious numbers are shrinking, why people are drifting from one religion to another until finally they exhaust the options and just give up on the whole thing.

Those are the people that apologetics are aimed at – getting unchurched back into the fold.

Not people like me who are naturalists, who accept that the universe is natural and that through the study of nature – we will eventually learn more and more wonderous things about the unverse – and who knows what we can discover?

But, religion is a force of status quo, change resistant, and fear – fear driven acquisition while the acquisition is possible and without much thought for those who will come after because hey, god sorts out everything, right?

If anything, religion and politics – as soon as someone thinks they are are a divine mission or are a divinity themselves – how many more genocides of population groups do we need before we put a test of religion as a checkpoint on the road to office?

A test of a person to demonstrate that they are a socially capable person who, if religious, knows that their religion is a personal and private matter – with no place other than the most general of terms – that is, limited to being an inspiration for our best behaviour and consideration of our fellow humans – in public life.

We cannot manage the complexity of the world if we beleive that the earth is only a few thousand years old and that it’s ours to do with what we want because it’s just a dress rehearsal for the afterlife, where god has everything sorted out in a simple reduction of good people vs evil people.

Because life is just not that simple or reducible to black and white. There’s a lot of shades of grey and colours in the rainbow – there’s a lot of different people with different traditions and interactions and the plethora of all these people does demonstrate that as much as we have in common, there’s infinite diversity in infinite combinations – that’s the strength of us as a species – adaptation.

The only thing that conformity across a population benefits is viruses and parasites. Conformity does not serve humanity, because it’s our diversity that is our strength and our way forward, into the future.

we can’t sink to the lowest common denominator, we have to reach together for the highest

but we have to know what we are reaching for and agree to be in relationship to achieve it.

and one of the highest goals is eliminating the sub-optimal conditions and events – because they are predictable and preventable – we have to stop pretending to not know what we know.

We have to bring in all the knowledge we have accumulated and analysized and turn it all into understanding.

So it’s not that we need to act with coddling towards each other sensibilities, but make sure everyone’s sensibilities are robust enough to handle reality.

And people who cling to religion, are not robust enough as individuals, for the naturalist basis of reality.

we need to understand history, about social, political and religious forces and how it impacts history

the story of humanity, what we’ve done, what we’re capable of

and that by observation, testing and experimentation, over generations and thousands of individuals who have been consumed with tedious data capture, data analysis to understand trends and relationships, but building up a body of knowledge that is time testes and always adjusted for new data and new promising ideas

this is the robustness of the natural world

whereas religion, is generally invented by one or a few people, and spread by the word or the sword – competing in the social forces marketplace of ideas

and as an idea, religion’s only purpose is to control the masses through rigid gender roles, limited education and strict behaviour code enforced through threat of punishment or promise of reward.

Basically, the masses are like single celled organisms, – stimuli response

much like the call and respond sing song of church services

it’s not so much existing, as following a script laid out for you – regardless of what your genuine self would like

so this is why christians say with all honesty, if gays want to get married, then live as if you are straight and be married

and they are confused when we point to the law of our secular land and say, equality under the law means we can form relationships based on love, whatever form of love we can get into relationship with

but they have confused these things, because they haven’t lived an existence where they weren’t in compliance with the social norms that are legally recognized.