In my 13 years of working in the public service of Canada, I became something of an expert on the job competions, and preparing resumes, writing the 2 types of exams and naturally, the interview process.

Over the years, I helped many people participate in competitions and even attain promotional advances.

I have been asked by a lot of people to create a workshop to teach what I have learned to help people get jobs in the Federal Government of Canada.

But I find that a year of being in recovery following a diagnosis of PTSD, a pyschotic break with reality, social and general anxiety disorder, panic attack disorder, agoraphobia and more types of depression than I can remember being told that I had…..

that there is no way that I could ever, in good consciousness ever help anyone to seek employment within the public service of Canada. I just can’t be responsible to impact the quality of someone’s life as negatively as that.

The public service used to be a calling – and in Canada, up until the 1970s, being a federal service employee meant you couldn’t vote in federal elections.

but now getting a government job is deemed a coup – and you know what, when an industry gets a reputation for a certain kind of employee – guess who are the people who most apply?

Most public service employees are regular people. they go to work and do their job with not enough resources, usually too many approval layers because everyone is to afraid to be responsible for decisions and too many people who do not understand what the purpose of policy and procedures really are or just how interconnected they are. 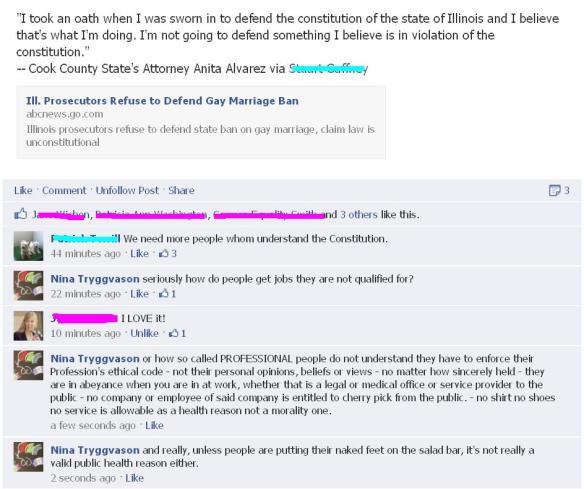 With the Harper government’s new budget, comes their renewed attack on the Federal Public Service.

But the voters and public at large shouldn’t fall for this scapegoating.

The salary of the public service employees does largely come from taxes – personal taxes, corporate taxes, sales and other taxes  – but also the service fees, fines, proceeds of crime sales and other revenue that departments generate.

Departments that collect money don’t keep it for themselves – it goes to the Receiver General and is disbursed according to the budget.

The salary of a Public Service employee, whether they are federal, provincial or municipal, is not a gift from you to us.

We work for our salary the same as anyone else. We pay taxes and are consumers, same as you. And, we pay into benefit and pension plans – like some other people do.

That most Canadians do not have an employer pension plan doesn’t mean that the Public Service Pension Plan is up for grabs.

I find it very curious this attitude that Public Service Employees somehow owe something extra or that “taxpayers” are somehow our bosses because our salaried are linked entirely to taxes in the public mind.

Public Service employees go to restaurants, buy consumer goods, hire professionals,  we spend money the same as everyone else.

Everyone’s salary is taken from everyone’s pockets who participates in the economy.

That Public Service salaries are partly tax sourced isn’t any different from a retail employee or office worker’s salary being sourced from their company’s profits.

After all, everyone does enjoy having infrastructure like safe highways, rail and air. Regulated drugs and first responders to disease outbreaks, disasters. Investment into and regulation of industries – even international promotion and a lot of services that are simply not appropriate for the private sector – like immigration and citizenship, welfare and unemployment insurance programs, Veteran Affairs,  international trade, crown land, treaties and oversight of a lot of legislation.

Government services exist because they are not provided by the private sector – which has proved time and time again to not be trustworthy to regulate itself.

In Canada, we are lucky to not have the rampant corruption that other countries have. That is because of the checks and balances – but also that people are compensated fairly for their work.

People are needed to provide those services, which means we get paid like anyone else in any sector.

Not happy with your salary or benefits – then why not try out the public sector?

Or maybe you would work instead to build up the benefits of your industry, instead of knocking down another sector.

Roll back wages, stealing the pension that we pay into, and the demoralizing scapegoating, is not the way to improve the services you get or encourage anyone with skills and a passion for service to join the public service.

I am not saying that all public service employees are excellent and every workplace has  slackers and incompetents, no matter what the sector is.

But when an industry is tarred as having a particular kind of employee – guess who ends up being the dominate applicants and eventually employee? The negative stereotype.

Reality is that you  get the service what you pay for,  no matter what sector it is.