Religion being characterized by a central “scared” text, a hierarchical power structure, rituals, dues and at least weekly meetings. The stricter the faith, the more time members must spend in rituals and prayers and a higher percent of their income is handed over to the central power structure.

Groups are lead by ranked officials in a semblance of fellowship and community – well, as much as you can pack into a mall sized mega church which often doubles as a mall /community centre. which is just another way to have you attend church and spend your money….

Worse the behavioral codes required of the faith seem to be more important to impose on non-members and into secular law than the members being obedient to and living as their faith demands. Certainly the behaviour codes set out for the followers never apply to the leadership or those in power in the faith – Given the financial obsessions and scandals and the sex scandals in all major religions – from simple adultery to systemic sexual abuse of children.

Spirituality, on the other hand is really about an individual who may or may not being to a group of practitioners. Rarely are there sacred texts and information is shared between a mentor/student relationship with a focus more on natural balance between the self and other people and harmony with nature.

Enlightenment is the coming to understanding on your own, with or without guidance,  rather than being fed or having imposed upon you some one else’s “revealed knowledge”…..

conservatives are extremely tolerant of disparity because it reinforces their sense of being favoured by their god, as evidenced by the circumstances of others. it’s why they join country clubs and form secret societies at ivy league universities too, all about who is in and who is out. 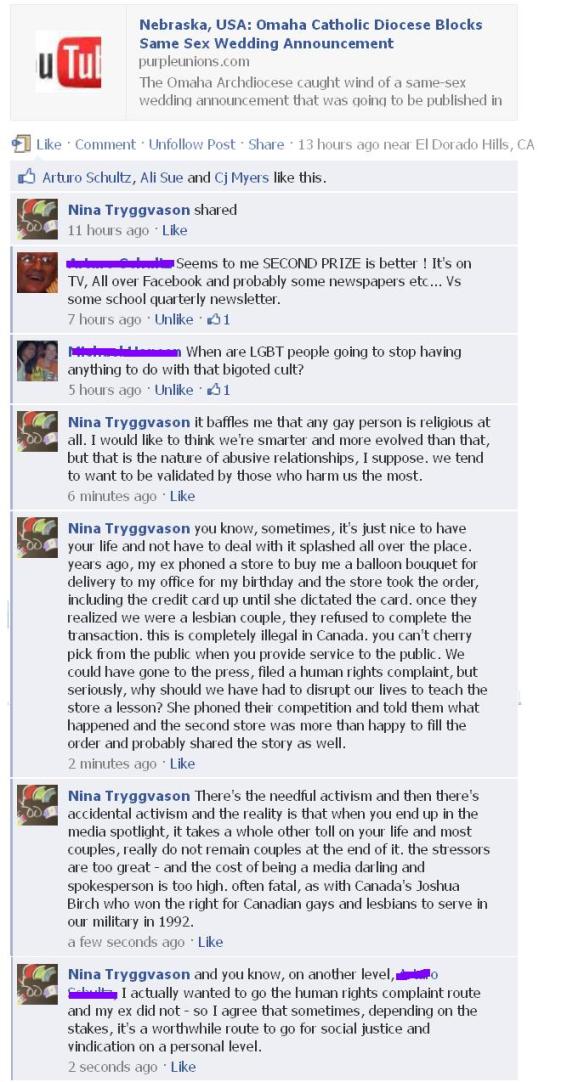 note: Joshua Birch sued the government and prevented the military from discharging him for being gay. He won at the Supreme Court of Canada and committed suicide on his 35th birthday, December 25, 1992. I never met him, but I will never forget him.

Our sense of morality is innate and I think can be quantified and measured.

Morality is a complex equation:

Our Idealized Society subtract the averaging of our lifetime optimal, par and sub par experiences and divided by our childhood experience.

Childhood is a critical time when we learn from our parents and peers what is acceptable behaviour and what is not.

The boundary between moral and immoral conduct are the transgressions of our childhoods – significantly, children with pets better learned not harming other living beings – but more, the actions we regret from childhood when we didn’t know any better because our understanding of the world was limited to our experience of the world, with no consideration that we are impacting the world and others.

willful ignorance is not a virtue

superstition is not a virtue

failing to take responsibility is not a virtue

is NOT UNDERSTANDING right from wrong

in fact, being able to understand right from wrong is what got the leading characters from the bible kicked out in the first place

who has no sympathy or compassion or sense of measured justice