The Spouse and I are watching Xena Warrior Princess on DVD from the Hercules three episode origins to the final episode.

From their first almost kiss – Xena was in Autolycus’ body  – across the astral to the moral plane to their last kiss: 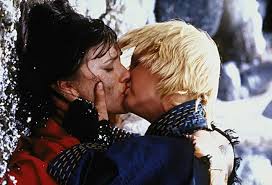 It’s strange to realize that the obvious lesbian relationship was controversial and explored through subtext until the final seasons, when I Love Yous were exchanged more often than chakrams were thrown.

It’s quite different to watch a TVshow when it airs on TV, once a week than to watch it on DVD or watching it on DVD the way that me and The Spouse do.

Each episode has some challenge to get through, but the cumulative changes that happen to the characters throughout the episodes and that impact their decisions are the seasonal arc.

Season 1 of Xena begins with Xena making a decision to leave the warrior life for a life of good, but this resolve is challenged when Xena saves Gabrielle and her village from slavers. Xena realizes that to be good doesn’t mean not being a warrior, but being a different kind of warrior.

The first season perhaps didn’t set out to make Xena and Gabrielle the first adventuring TV lesbian couple, but I think that Robert Tapert had planned to make Xena change the world by showing us how hard Xena and Gabrielle were going to work to be together, despite past loves and potential future loves, that they fought to stay together in live and beyond.

Knowing how the show ended, it’s quite different to watch their story unfold than to watch to determine when the relationship stages could have occurred. By the end of the show, it wasn’t deniable that Xena and Gabrielle were a couple and there were far too many thesbian jokes – Xena bought Gabrielle Sappho tickets for her birthday in the final season.

So watching the show this time, we’ve been watching to see when certain relationship miles stones – like when is the earliest episode that they would be having sex by and when can there be no more doubt that they are a couple in every meaningful meaning of the word.

Whether people choose to ignore the sapphic subtext and even overt text and even in your face text to beleive that they were just friends, no one doubts the love and the bond between the two women. In 2011, it’s ridiculous to think back on the show and pretend that they were anything but a couple.

Season one of Xena broadcast from September 1995 to July 1996, back when a TV season lasted the school year. So summarizing as the seasonal arcs, rather than the episode stories:

Episode 1: Sins of the Past

Xena rescues Gabrielle from slavers and Gabrielle follows Xena into the wide world.

Xena and Gabrielle resist the temptation of male versions of each other as potential mates and continue their travels together.

Throughout the series, Xena or Gabrielle would met and have feelings and maybe even sex with a man, but there was never a doubt that ultimately, Xena and Gabrielle would chose each other over anyone else. And not just because doing so would have ended the show, but from the characters themselves even to the various descendants and occupying other bodies.

Xena undergoes a Dreamscape Passage of confronting her demons to rescue Gabrielle from Morpheus worshipers interested in her blood innocence. (Gabrielle hasn’t killed anyone yet)

Xena revels her pragmatic romanticism to Gabrielle when she plays matchmaker for a King with a problematic prophesy baby and the granddaughter of the original Pandora, who has been doomed to wander the earth carrying the hope of all mankind.

What greater hope can there be than finding a home to belong to or for Xena and Gabrielle, someone to belong to.

Episode 5: The Path Not Taken

Xena fights for true love and romance again when she prevents an arms dealer from interfering with the marriage alliance of feuding kingdoms. Xena kisses the last of her heterosexuality goodby with the death of Marcus, although, she does have the odd falling back on old habits in future episodes; but nothing that Gabby has to be concerned over.

Xena thwarts Aries attempt to recruit her back into his fold, while Gabrielle fights to save Xena from villager’s blood thirst.

Gabrielle releases three Titans and demonstrates her mettle to be as strong as any warrior. Xena can’t look at Gabrielle as just some kid anymore, but as a strong and capable woman in her own right. They are starting to become equal partners.

Hercules and Iolaus pair up with Xena and Gabrielle, reinforcing the coupleness of each TV pairing as they return to their respective shows.

Gabrielle falls for and loses another sensitive male while Xena restores death to the world.

The series would have several episodes of Xena or Gabrielle falling for a man who would then die in the finest of TV Girlfriends tradition. It was as if they did one periodically to keep the TV Morals Police at bay, plausible deniability that didn’t fool anyone who really paid attention to the show.

Xena prevents a war between Centaurs and Amazons, while Gabrielle becomes an Amazon Princess.

We also get some interesting back story, as Xena is strangely an expert on Amazon customs despite having never been a member of the tribe….

Based on their devotion and body language, this is the earliest episode that Xena and Gabrielle were having sex.

This is not an episode that I care for, I always found it a little preachy and the only saving grace in the show is Salmoneus.

Salmoneus and a handful of other colourful characters are under the radar gay characters who’s main role is to turbo charge the female heros or play mother/wife to the male heros.

Xena and Gabrielle face their biggest threat: Perdicas, Gabby’s ex-fiancé, who’s fighting for love in Troy, which is just fighting the Greeks because they’ve been fighting for so long that love is a hollow ideal.

Episode 13: Academy of the Performing Bards

Gabrielle reaffirms her place by Xena’s side when she takes a side trip to bard school and decides that living adventure is better than telling about someone else’s adventure. But not before she teaches the male bards to honor the heart of the story and not focus overmuch on the adventure.

Episode 14: A Fistful of Dinars

Xena and Gabrielle work out some tension, when an ex-fiance of Xena’s is one of the scoundrels they temporally join up with to prevent treasure from falling into bad guy hands.

The sexual tension between Gabrielle and Xena’s ex as a Xena proxy was quite delicious, as it’s clear that this was not a man that Gabrielle would have had any interest in, if not for his past with Xena.

One of the funnest premises of the show was that the gene pool of the ancient world was much smaller and so characters often met dopplegangers, which is a delightful way to play what if with the characters. What if their life had been different.

In this episode, Xena’s double is a pampered Princess, whom Gabrielle has to teach to be a credible Xena, while Xena stops a plot to kill the princess and end slavery in the kingdom.

Xena gets a taste of the high life and Gabrielle discovers how annoying sheltered people are.

By this point, Xena and Gabrielle are well established as an unbreakable duo, but while it’s not clear that they are definitely having sex, the sexual tension and subtext is well established.

This episode reunited Xena and Marcus so that Marcus, who’s last action in life was to save a princess, could rest in the nice part of the Greek afterlife.

Episode 17: The Royal Couple of Thieves

I think that the producers wanted the heterosexual deniablity  so that whether they were lesbians could be the public debate, rather than the religious people realizing how effective that the program was at dealing with Christianity, putting it in the context of being an upstart cult of monotheists among several such cults over the span of the show and actual history.

Xena drafts Autolycus to steal the Ark of the Covenant.

This is my least favorite episode and I skip over it on DVD.

Gabrielle takes the lead in the episode and restores a fallen warrior to honorableness.

Xena and Gabrielle rescues a young boy who’s father is going to sacrifice him on the orders of his one god.

Like Gabrielle working out father issues in the prodigal, Xena works out her daddy issues in this episode.

Xena gets poisoned, and Gabrielle must take her place in fighting a warlord and protecting a village and the merchant Salmoneus, a.k.a. Lord Seltzer.

Gabrielle puts on Xena’s clothing in a wonderful tribute to the show’s opening montage, and ups the subtext of Gabby being under Xena’s skin.

There’s something intimate about wearing someone else’s leather clothes.

Xena’s pass comes back to haunt her in the person of Callisto and Joxer becomes the male comedy relief and a reminder that none will come between Xena and Gabrielle. No matter how kindly or decent the guy is, lesbians are lesbians because they love women, not because they fear or don’t like men.

Xena confronts Cortese, the warlord who burned her village and turned her into a warrior; as Callisto faced Xena in the previous episode.

Although, Xena has no pretense about personal responsibility, unlike Callisto who blames Xena for Callisto’s destructive force.

What’s the brilliant part in this episode is Cortese – living as the legal king of his kingdom and being the region’s warlord bandit – he has the best of both worlds, plundering as a side job to the far more enriching position of being king. He’s a warlord with the long vision and one of the more formidable foes for Xena – after all, it’s good to be the King.

Episode 24: Is There a Doctor in the House?

The season ends with Xena teaching field medicine to Hippocrates and healing priests who limit treatment to prayers and, well, faith healing.

Gabrielle dies and Xena refuses to let her go, inventing CPR from sheer desperation, and restoring Gabby to life.

After this, each season would end with Xena dying and every season opener would be Xena or Gabby or both, restoring Xena to life and to Gabrielle.

8 thoughts on “Xena and Gabrielle”